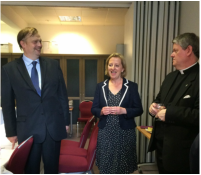 Letter of thanks from Cardinal Turkson, Prefect, Dicastery for Promoting Integral Human Development at the Vatican, for the Friends of the Holy Father donation of £35,000 to the Pope’s Covid appeal.  (March 2021)

A New British Ambassador to the Holy See has been announced but is not due to take up the post until the Summer. He is Mr. Chris Trott.  (March 2021)

Peter's Pence
The Friends took on the copyright of the 'Peter’s Pence' booklet by Rosemary Rendel this year.  A copy of the edited and reprinted 2020 version was sent out to all the friends.  If you would like to download it, please click here.
Read the origins of Peter's Pence    (December 2020)

New Nuncio announced
Archbishop Claudio Gugerotti has been appointed Apostolic Nuncio to Great Britain.  He was born in Italy and ordained a priest in the Diocese of Verona.  Most recently he was the Apostolic Nuncio to Ukraine. To read more, please see our December newsletter.  The Friends look forward to meeting him shortly. (July 2020)

Reception at the Apostolic Nunicature, September 2019
The Friends were honoured to host a reception at the Apostolic Nunciature, Wimbledon recently, with kind permission from Archbishop Edward Adams.  A large group of supporters and friends gathered to hear the Nuncio tell us how the Pope emphasises the importance of prayer.  John Dean, Chairman of the FHF then spoke about a recent building survey that has been done on the Nunciature, which was paid for by the Friends.  Thank you to everyone who attended. (Sept 2019)

Annual Mass and AGM 2019
Our Annual Mass was celebrated by The Rt Rev Thomas McMahon, Bishop Emeritus of Brentwood on 13th June, at Westminster Cathedral.  It was followed by the AGM in Vaughan House.  The Bishop Emeritus attended the AGM and spoke about the importance of supporting our present Pope and the meaning of 'Friends' - that it goes both ways.  This was followed by a buffet supper attended by many friends of the charity. (June 2019)

Grant sent to assist works at the Catacombs of St Domitilla, Rome
The Friends recently sent a grant of £26,000 to assist valuable works at the Catacombs of St Domitilla in Rome.  The grant will be used on a new lighting system, recovery of a Damasian inscription and to construct of a panel with a copy of the homily given by St Gregory the Great at the Basilica in 596.  Read the acknowledgement letter from Cardinal Ravasi. (January 2019)

Swiss Guards Exhibition
An exhibition about the Swiss Guards who guard the Pope and the Vatican, took place in the Chapels of St Patrick and St Gregory and St Augustine in Westminster Cathedral last November and December. The display featured photographs by Fabio Mantegna, and exhibits of uniforms and artefacts documenting the long history of the Swiss Guards. The images and exhibits were accompanied by comments and reflections by the Swiss Guards on their work and experience, providing a deeper understanding of the life and vocation of the men whose task it is to guard the Holy Father. (November 2017)
​
Pilgrimage to Rome
Read an account of our recent pilgrimage to Rome on the 1950th Anniversary of St Peter's martyrdom, which was held from 23rd to 30th June 2017. The pilgrimage recalled St Peter in Rome, and places associated with his presence in the City, his 25 year ministry there and death and burial in AD67.  It was led by Fr Guy Sawyer and Dr Michael Straiton.
Read an account of the pilgrimage. (August 2017)


New Ambassador to the Holy See appointed
Mrs Sally Axworthy MBE has been appointed Her Majesty’s Ambassador to the Holy See in succession to Mr Nigel Baker OBE MVO. The Friends of the Holy Father recently entertained Mrs Axworthy at a reception in Central London. She will take up her appointment during August 2016.  We wish her every success in her new role. More info. (June 2016)

Pope's Commitment to Human Trafficking
The Friends of the Holy Father helped fund the Mayors' Conference in the Vatican on human trafficking.   See photo above and photos below, taken by our Chairman, John Dean. (July 2015)
A letter of thanks was received from the Pontifical Academy in Rome. (October 2015)